boxerlego
July 2014 edited July 2014 in Edward Leedskalnin
Hi, here is one of my latest projects that I'm currently working on. I hope you find it interesting as I do. I still have more research to do with the PMH generator and a lot more to talk about.

Description:
The PMH generator is made almost entirely from LEGO parts. On the magnet rotor I use (12) n35 20mmx2mm neodymium magnets that is capable of lifting up around 5 pounds with one pole and up to 30 pounds using both poles and the Coils on the PMH are tuned to 60Hz .The prime mover is a DC motor with a 5 pole armature and is powered from a 9 volt aa battery box. I use a 1000uf 35v capacitor to store the charge along with different kinds of diode rectifier circuits to charge the capacitor. 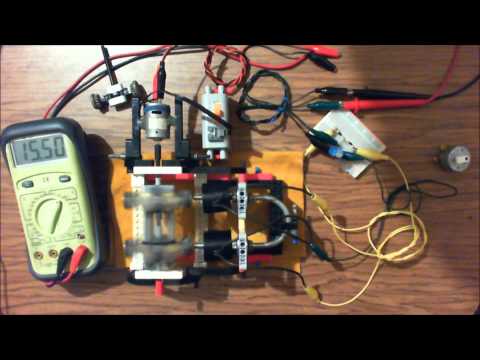 In part 1 I started out by testing a center tap rectifier on the PMH generator which basically work about as good as the half wave single diode rectifier I used in the part 2. Later in the video I connect the lego speed computer to show the RPM of the magnet rotor while I put a load on. The Load I use here is a stepper motor which was able to turn with much more force then the DC motor but that was only for a very brief second. Now the RPM on the Magnet rotor with out the Stepper motor connected was around 2500 and when the Stepper motor was connected to the capacitor the RPM increased up to 2600 RPM.

Now one of the first things I wanted to do with my PMH generator is replicate this magnetic effect called the Angus effect where the magnet rotor increases its RPM while under a load connected to the capacitor which appears to be defying lenz law. Now this magnetic effect can be explained by something I call demagnetizing speed and can easily be done to a DC Motor by weakening the strength of the magnets to make its armature rotate faster but for a Generator it rotates faster because the rotor magnets interaction with the ferromagnetic Core weakens due to the capacitor which is essentially a break in the circuit and because of this break in the circuit Lenz law never goes in effect. Now the effect is apparent when a load is connected to the capacitor because of this all those individual magnets have somewhere to go instantly and weakens ferromagnetic Core interaction with the rotor magnets allowing the DC motor to rotate the magnet rotor faster. Ed some what mentions about this while hes explaining why alternating current are able to run so far away their generators 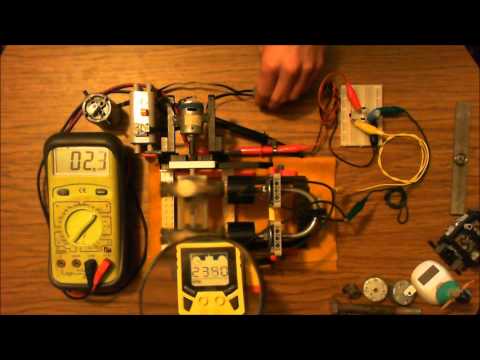 This time in part 2 I hook up a full wave bridge rectifier to the PMH generator which is generating around 30 AC volts and rectified that to 29 DC volts, but once I put a load on like a DC LEGO XL motor, the voltage output drops down somewhere around 2 DC volts. Now understand that the XL motor is capable of 150-240 RPM by being powered off the 9 volt aa battery box and that gives me a base RPM to compare the PMH generator ability to power the XL motor to. Also another thing to take in consideration is that I am able to connect up two DC XL motors together at their wire leeds and by hand be able to rotate the shaft on one of the XL motor and use it as a generator to directly power spin the other XL motor with about as much RPM and Torque as I put on the DC generator shaft.

That is it for now. Thanks for reading!