boxerlego
January 2015 edited January 2015 in Edward Leedskalnin
This discussion here is about the real magnetic substance that is circulating in the metal. I use the terms Meta Topology to describe the study of the invisible magnetic structure in conjunction with a solid geometrical structure. Ed in his book MAGNETIC CURRENT said that "I think the structure of the metal is the answer" on Page 18. (The quote below is the paragraph where it is in the book, I underline it for everyone.) I agree with Ed in that the metal structure is key and certainly plays an important part for an array of magnetic devices and this includes everything from the Eds PMH to function perpetually to a Relay Switch to an Antenna along with every type of DC motor to AC motor out there like the shaded pole motor. Also magnetic toys out there that is a pure expression of Meta Topology in the form primarily dealing with magnetic building. Everything from the metal spheres to the magnetic connecting rods. Meta Topology involves the whole thought behind magnetic application and function and thinking beyond. Another thing, you have been wondering how a U shape permanent magnet can keep its normal strength indefinitely. You know the soft iron does not hold magnets, but you already have one that holds it. It is the perpetual motion holder. It illustrates the principle how permanent magnets are made. All that has to be done is to start the magnets to run in on orbit, then they will never stop. Hard steel U shape magnets have a broken orbit, but under proper conditions it is permanent. I think the structure of the metal is the answer. I have two U shape magnets. They look alike, but one is a little harder than the other. The harder one can lift three pounds more than the softer one. I have been tempering the other steel magnets, and have noticed that the harder the steel gets the smaller it becomes. That shows that the metal is more packed and has less holes in it so the magnets cannot pass through it in full speed, so they dam up in the prong ends. They come in faster than they can get out. I think the ability for the soft steel welding rod to hold magnets is in the metal's fine structure. Page 18

When there are magnets in it, not all the time do they work as expected take this magnet piston idea for example. One thing to know about pistons is when there space together in close proximity of each other they can be more compact and output more power. Magnetic pistons totally remove the ability to space each piston closely together because the magnet piston are going to be either be attracted or repelled if placed close together and this produces unwanted friction inside the piston cylinders. And in order to have a good strong driving magnetic field on the piston the coil must be very close to the magnet piston for if its not that is fractions of power lost there. Now look at this pictures below it is a 6 tooth metal sprocket or rotor here and just like Eds Fly wheel there is a basic magnetic function that can be gained from this shape of this metal structure. To see how this magnetic function is at work there is a gif image displaying it. The 6 tooth rotor is basically acting as a switch for the metal core of the magnetic circuit. Just like the V shape magnets around Eds wheel there is a air gap in between each of the tooth's on the metal sprocket. The gif image only shows how the magnetic field is interacting within the metal. My first video I made which is basically a pure magnetic test observation on the early workings of a flux switching alternator. In this video I want you to pay attention very closely what I do with the magnets. The magnets will show you everything. 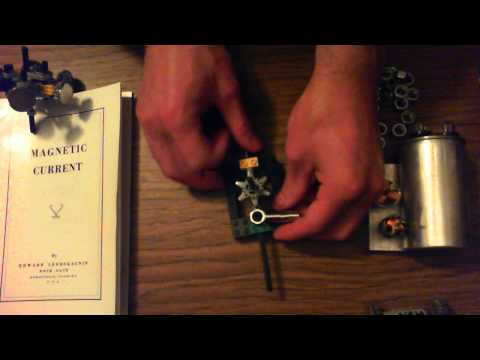 This is the standard magnetic lines of force model of a bar magnet usually appears like this in the picture here along with a link to a Magnet video showing the normal attraction and repulsion of between two bar magnets. Side Note: This book sited above is without doubt around in Edward Leedskalnin time. Published in June, 1913 maybe he laid eyes on a copy of this book around him? Ed said he knew everything about weights and levers and this book certainly has that and much more.

Now that you have seen how a standard bar magnets function together and have reference to a standard Iron fillings model above you are ready. Lets begin. 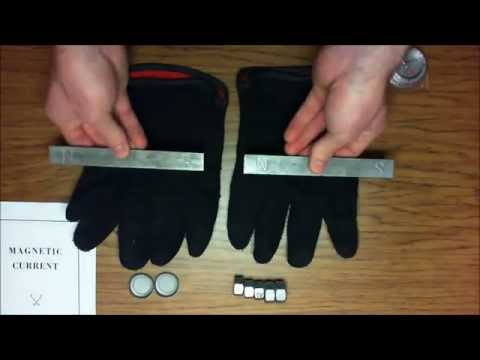 In this video above I am showing you two bar magnets with individual North and South Strong bar magnets but don't be mistaken this has nothing to do with Magnetic monopoles , What is actually going on here is several magnitudes larger then that and to understand this you need to have a real good grasp on what Ed is teaching you in his book MAGNETIC CURRENT. Respectively the way modern science perceives magnets has always been a notion that both sides of the bar magnet always begin equal in force but here for the two bar magnets in the video it arguably not the case. The big main argument comes for the basic understanding comes from the knowledge that when you break a magnet in half both halves become a smaller magnet and the more you break the magnet down the more smaller magnets you will make but you will never break the magnet down to a unit that has only one magnetic pole there must always be a South and a North. Now there is North and a South pole on both bar magnets but here is the deal, only one of the magnetic poles is actually where you would expect it to be and that is the strong side of the bar magnet the other magnet pole is somewhere inside the metal bar and not predominately at its edge where you would typically expect it to be. This magnetic pole is recessed in the bar and makes ,what Eds says in his book, an extra pole. Ed mention this on page 4 . No wonder Ed wanted you to check for this in magnets designed for compasses would you want a compass with one strong magnetic pole end?.

When you are making a magnet pole in the welding rod use U shape magnet. South Pole magnet to make North Pole magnet in the rod and use U shape North Pole magnet to make South Pole magnet in the rod. You can drag the magnet over the rod from end to end, but never stop in middle. If you stop in middle there will be an extra pole so it will disturb the magnet's circulation. Use iron filings to test the rod if there is any magnets in the middle, and if there is the filings will cling to it. Then drag the permanent magnet over the rod and it will take it out. To take the magnet out from rod ends approach or touch the rod end with the same kind of magnet that is in the rod, by dipping the rod ends in iron filings, you will see how it works. Page 4

Well this is it for now. There tons more information to cover this was just appetizer.