BRIAN
March 2016 edited March 2016 in Decoding Ed's Writings
So I've got two copies...an older one and a newer one, read both, compared the two. I am convinced there is message woven into the text. I thought perhaps the title was a vigenere cipher that was then rearranged into an anagram. I have tried many vigenere cipher attempts using various keywords etc...can't say I've discovered much. An anagrammed vigenere cipher of sixteen letters can at times yield a thousand different anagram formations, many of which are word you COULD use....pretty impossible to land on the exact words he might have anagrammed into ABIEH title. It is a dead end.
I started to think if I were to attempt to hide text into a booklet, it would be impossible to use a cipher...you get too many Q's and Z's and letters that are to difficult to put into normal text. A few observations: the book makes very little sense, while much of it is probably good advice like looking through your eyelids properly and not showing your gums and all. But I think, as many do, it was written solely to hide a message. If you had text you wished to hide you would have to encode it using the actual letters, not symbols or gibberish words....and you'd have to space them out in some way that was easy to solve but not too easy...that is why the book is sort of nonsensical he had to weave actual words and paragraphs around the hidden text. BUT...in order to read the encoded text, one would need to provide a numerical key to allow a person to land on the correct letters yes? There are SOME numbers in the text, 15,000 people who visited, the word ONE is listed, there are number of other numbers but none really stand out and it creates another problem, if you hid the numbers too well nobody would ever be able to figure it out. I don't buy the whole enigma thing or hidden pics too much...it is too hard and speculative. He was smart, I think Ed wished for people to solve it.

Another issue is, if you wanted to hide a number of letters of text into a single sentence, it would create much difficulty as you would have to construct words and phrases that hold those letters that compose the hidden message, the sentences would become too difficult to manage. You'd essentially have to use a bunch of words and phrases that might not fit well together. So, you'd have to space your text out between sentences at a comfortable distance to allow you to weave believable words into the spaces between your hidden text. You could NOT mathematically plan the spaces of your encoded text precisely enough....like skip every 16th word or letter for simplicity, you couldn't compose a sentance that would make any sense. You would have no choice but to space your text not to a letter count or to a repetitive mathematical spacing....but to a distance. And then you'd have to provide some hint to where you begin your measurement. This is why the book has odd spacing in places, it has extra punctuations that aren't necessary and misspellings. He had to do that to make the distances between certain letters of his hidden message fall into the correct position. If you read Magnetic current...it is pretty obvious ED has control of the English language. He wasn't illiterate. He had to format it to fit his measuring device. He had to make it fit into a certain distance, not according to a reoccurring sequence of letter spacing. The hidden text is spaced out to some rule...and I think he gives you the measuring tool, on one of the first pages. Right here: 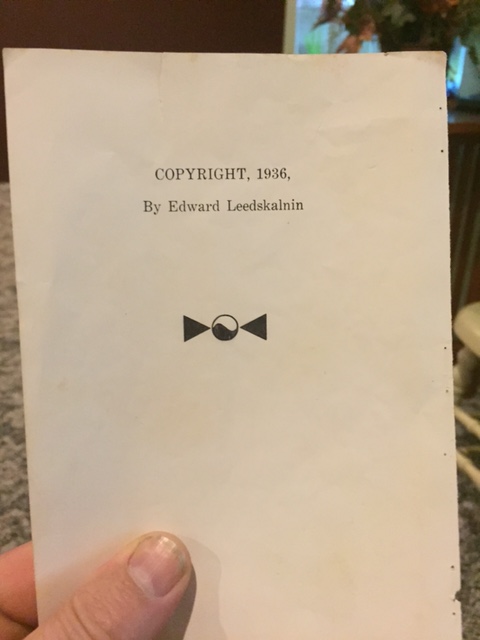 He left one side blank on every page and he also left this symbol blank on the other side....kind of a waste of paper eh? why would he do that? I think it is so you can see through both images...it is his distance key, his POINTERS as he called them..... and I think you use it like this below. Put them up to a light behind both pages...superimpose it upon the text. You have to tear the symbol page out, or copy it. The tips of the triangles point to letters...but not always...it is the spacing key I beleive. It is in fact, so simple, it seems right to me. He had to give you a key to point out the message, sure looks like a key to me. 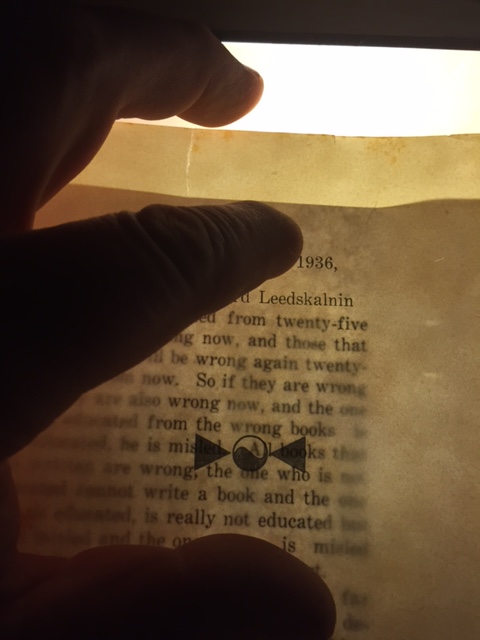 Anyone ever point this this idea out before? Figuring out what LETTER goes inside the EYE on the yin yang symbol is the issue. I suggest that if this method has not been previously considered maybe it is an option to try. I played around with it, and you can get some words but the key really becomes knowing where to position the symbol and which letters are being pointed out.